Both cars are top of the range in the Ferrari stable in the seventies and early eighties. In 1971 the BB starts of as the 365GT4 BB and the 400 was presented in 1972 as the 365GT4 2+2. Both are designed by Leonardo Fioravanti at Pininfarina and both have 12 cylinders. Both cars have never been officially sold in the USA. In total 2323 BBs have been produced between 1972 and 1984. The 400 had a longer span of life from 1972 till 1989 and a total of 2907 of cars have been produced. Both models were hefty priced, whereby the BB was fractional higher. In 1977 the 400 would cost you 23.750 GBP and the 512 totals a 25.450 GBP. Clearly both cars have a different character and have been created for different purposes and demand.  The 400 is a true Gran Turismo while the 512 is a true sports car. As the sale numbers indicates, both seemed equally popular and according to the time periode articles both were very well perceived and appreciated. On the current market the BB is far more valued then the 400 but is it justified? Is the BB overvalued or is the 400 undervalued. I guess in general true sport cars or convertibles with a pedigree fetches higher prices compared with 2+2 / Coupe or saloons. And of course rarity and the looks plays a very important factor. There is no pointer for this blog, it's more or less an observation. But wouldn't this be an ideal combo to have. Drive in your 400 to the track and continue on the track with your 512.

Unless you want to be like Sammy Hagar and use the BB on the track and on the road (note he has a 400i in his collection): 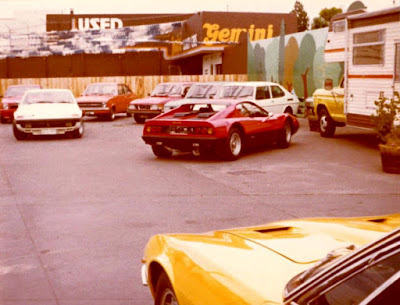