This unique photo got posted in the FB group: 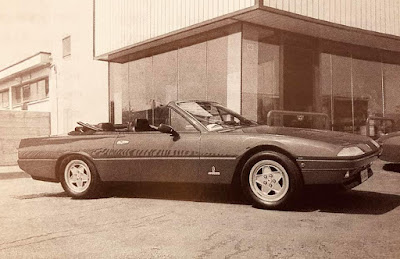 And so we are back from the roadtrip last week. So, how did the 400 behave? Well, to start with, the cars were transported on a truck to Napels and they arrived easily. However one of the cars did got a slight damage on the rear bumper which luckily could be fixed on the spot. And prior to this I had only the oil checked and pumped up the tyres. And about a few weeks ago I had used the 400 for a day out with the family - likely that was the last occurance as the kids are mostly grown up and barely fit. 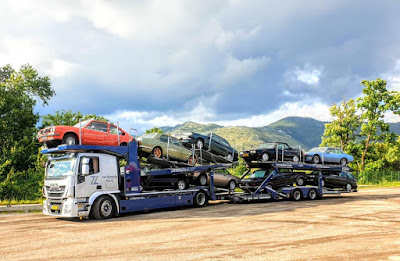 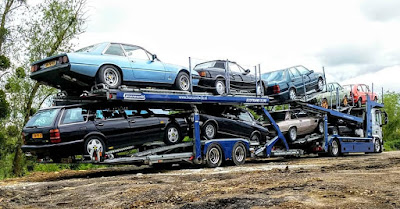 And the cars nicely parked at the hotel. 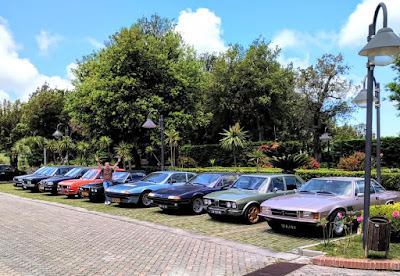 What a great start of the journey. However when driving from the airport to the hotel we hit the Friday morning traffic jam. The traffic was horrendous to the say the least. I have been in Rome, Catania and Palermo before and this was similar. Fighting for every inch. And not only that, the roads were extremely poor. During this small trip we nearly had a car accident (judging the local cars this must be standard). I'm still surprised nothing happened. So that afternoon a lunch was planned near the coast and a photo shoot in the city centre. At first I didn't want to participate with my car due to the crazy traffic and poor roads. But since everyone was going I jumped in the last second.

The lunch was about a 15 min drive and I did regret it very shortly. The roads were a true killer for the shock absorbers and the exhaust. At some point I thought the exhaust would fall off, you could hear it rattling and hitting the car constantly. Not a single inch of the road is smooth, its more like riding between holes (if possible) and bumps. I had both windows opened up as the airco is not functioning well. When I arrived the passenger window did not move up anymore, sigh! So I suspected either the window engine had failed or else something mechanically failed due to the bumpy ride (ie snapped wire or broken sliding wheel). Then I figured I had this emergency manual handle in the car. But that did not worked somehow. I felt stuck but when I tried to open up the window electrically you could see the handle was moving half a inch or so (both up and down). Pulling up the window by hand did not work out either. Not happy to leave the car like that we went for lunch though. Afterwards the guys went to the city centre while I drove back to the hotel to make an attempt to fix the car. This year I brought a very limited tool set with me, which I normally don't. And this was sufficient to remove the doorpanel and have a look. 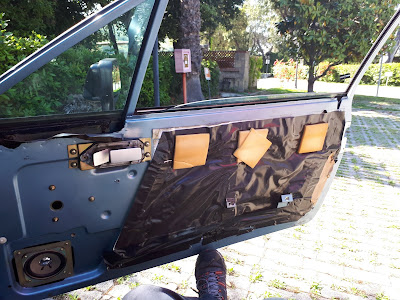 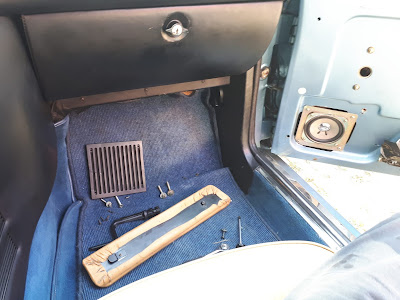 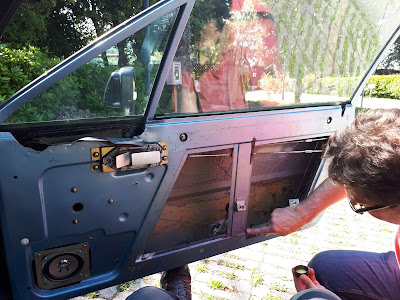 Not a very difficult task to remove the door panel, so once it was removed I was at least pleased to see all the mechanics were in tact (especially the mechanical moving wiring - which is a horrendous job to fix). I know the previous owner had done something about it but I don't recall exact what. The wire was at least properly greased. When checking the functionality it was somehow working again - SHIT!  (Self Healing Italian Technology). Glad it was cured though despite not knowing what the exact issue was. It remained functional throughout the remaining of the week.

The next day it became cloudy and eventually the rest of the week became cloudy, drizzling and rainy. Due to this a screenwiper issue came to light. Both wipers did had new (2 years old) rubber wiper blades placed, but only the rubber strips were done as I wanted to keep the old Original wipers in tact. Apparently they must have missed out to put one metal strip back (2 per wiper; front/back) and on the other side they did not fit it correctly, meaning the metal strip would come out slowly when used. This was fixed with a pair of pliers. For the other side we bought a new "old fashioned" wiper, pulled out the rubber and metal strips and put it on my car. Now it was working properly which was a good thing as the remaining of the week became wet.

These were the only 2 minor issue's I ran into. Credits to my co-pilot Jos who kindly assisted on these matters.

When driving up to North Italy the roads luckily only got better. The tunnel runs were very addictive. Every day I checked the oil but this was a pointless exercise as it's not using any. Similar as on the previous trips. The last day we spend driving mountain passes. Some very nice roads with great scenery despite the poor weather conditions. One of the guys just uploaded a small video taken from the Alfasud. If you look closely you can see two 400's driving in front him.

The final day was of course driving back via the German Autobahn towards home. I find cruising at 180 km/h a nice speed but on the crowded roads this is hardly possible. The good thing is that most gasstations offer high octane in Germany so at Shell I filled up with Racing 100 (in the Netherlands they only offer Vpower 98). In Italy and Austria I was able to fill up occassionly with 100. 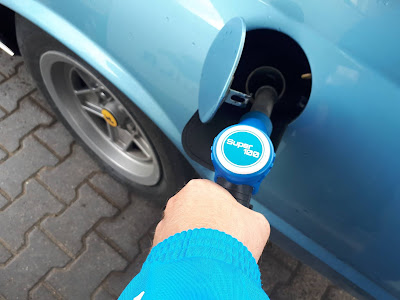 I almost tend to say you can feel the difference. Clearly driving a few days with the car, engine properly warmed up and speeding with octane 100 makes the car very happy. In any case, the 400 has proven again to be a great and reliable GT. Another 3.000 km effortless driving completed. In total the car has now driven 117.000 km. 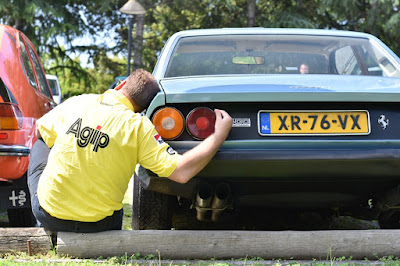 I just hit these adverts today and thought they were a nice comparisson, so just for the records. Both are from 1979 and having a manual gearbox, while the first one is a 400 injection and the second a 400 carburetor.  I'm curious to see how much the first one will fetch on the auction, they estimate between 60 - 80k Euro. The second is having an asking price of 85k Euro. Both are great GT's which still can be obtained for less than 6 figures. Connaisseurs only. 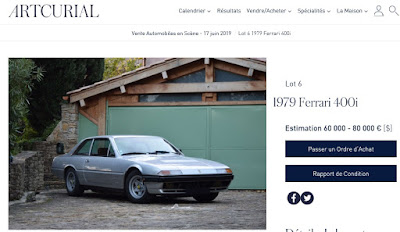 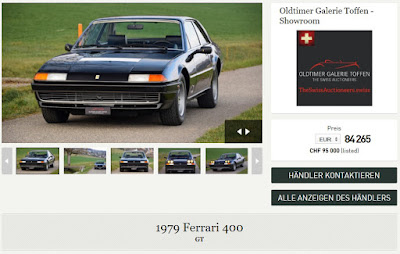 Rainman Ferrari 400i for sale in Japan

According to the supporting information this car was used in the movie Rainman. I have not seen the evidence so I can't comment on that statement. However this car for sale, VIN 54287, was grey with beige interior when it was the US and was owned by Jack Rapke, the famous film producer.

Yes, it's nearly time to make the yearly roadtrip to Italia again. This year will be different though. The cars are going on a transport with a trailer and we will be flying to the destination. How's that!?
Today was time to deliver the cars to the transporter company.

If you are interested to learn more about this year's roadtrip you can visit the website (Dutch only):

It felt a bit strange to leave the cars with the keys behind. But by now the cars have been loaded up and are on it's way to the destination. Unfortunately we don't have photo's of the truck loaded on to the trailer. But here a few photo's of some of the cars lined up prior to that.

And yes, you will see there is another 400 participating. It's a 400i Automatic phase 2 in very good condition. He bought one after he joined me as a passenger two years ago, apparently he was impressed by the ride. 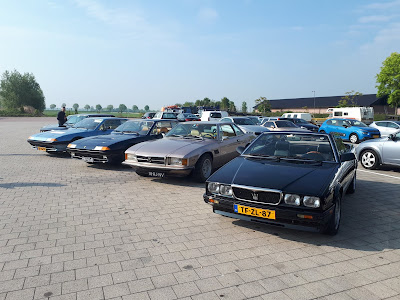 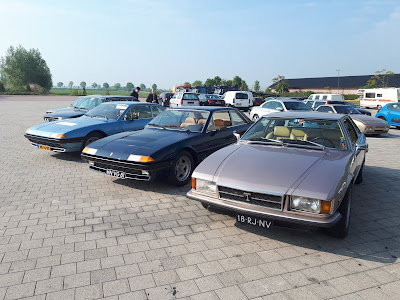 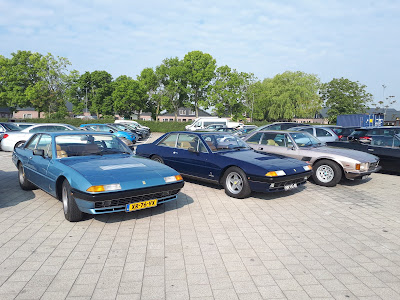 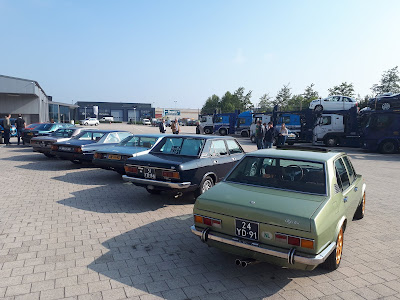 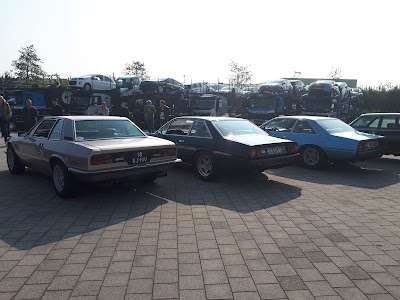 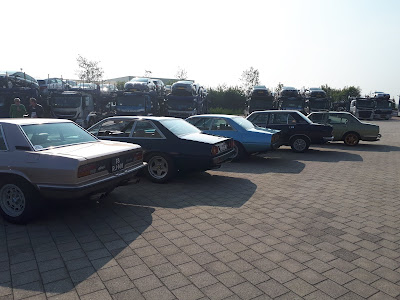 A great contribution by one of the readers. Grazie Mille Dedo! 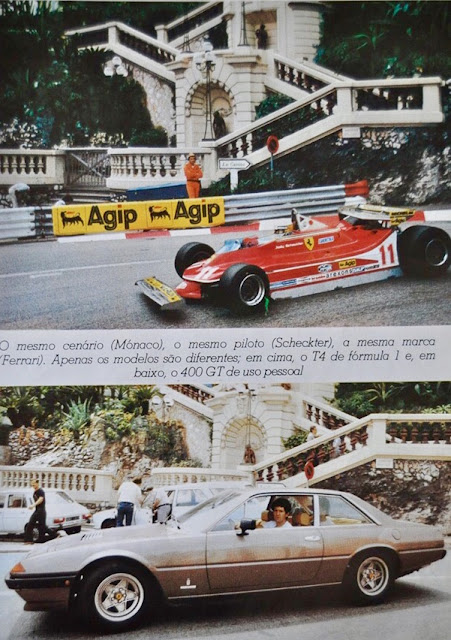 The Field Of Abandoned Ferraris (And How They Got There)

This story showed up today: 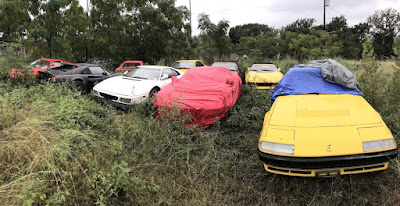 This one was offered for sale at Beverly Hills Club, see posting:

So now you know the story behind it. Apparently it's sold already. Wonder when and where it shows up next.
No comments: 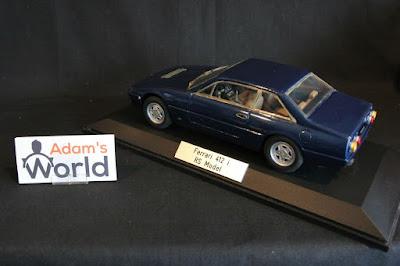 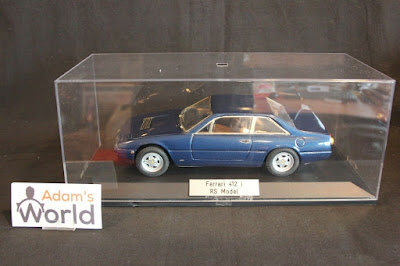 Email ThisBlogThis!Share to TwitterShare to FacebookShare to Pinterest
Labels: scalemodel 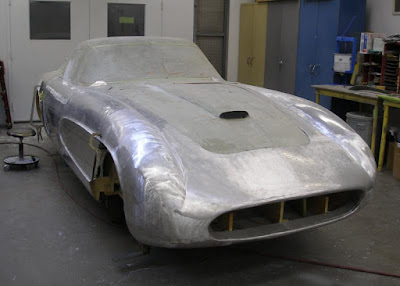 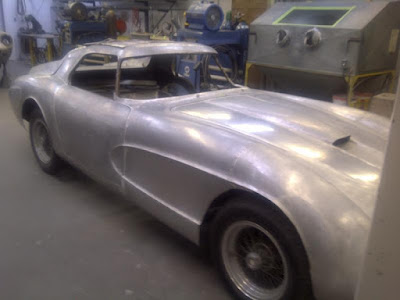 Email ThisBlogThis!Share to TwitterShare to FacebookShare to Pinterest
Labels: kitcar 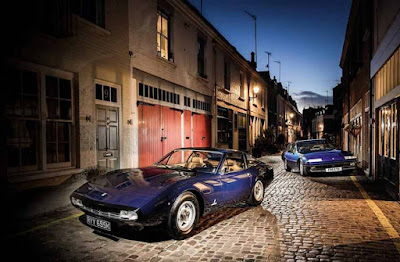 One of the readers of this blog informed me about this magazine article from Slovenia: 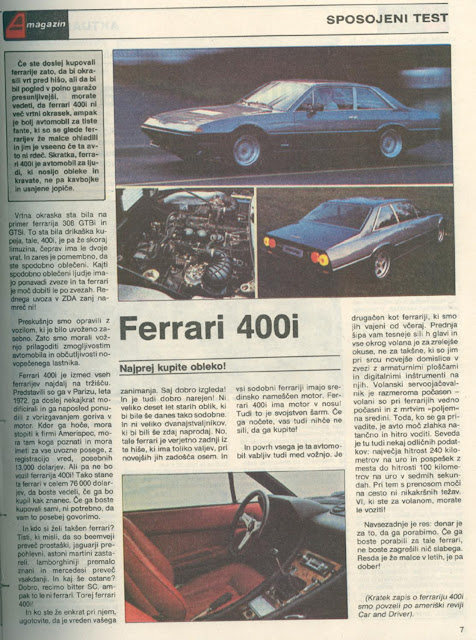