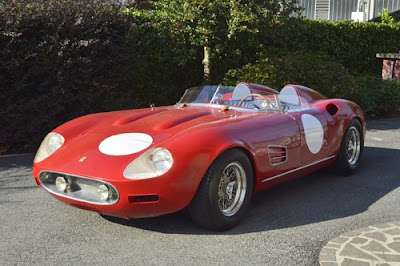 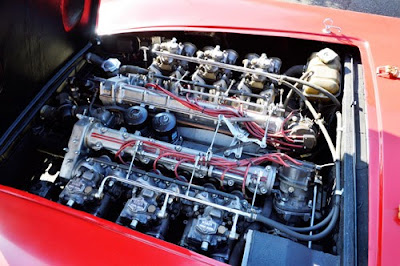 Estimate: £250,000 - £300,000
Registration Number: EU Taxes Paid
Chassis Number: 19235
With the intention of competing in the worldwide luxury car market, Ferrari introduced the totally new 365 GT 2+2 at the Paris Salon in October 1967. It bore a strong resemblance to both the 330 GTC Special built for Belgium's Princess de Rethy and to the famous 500 Superfast. The car was a technical triumph. It was the first 2+2 Ferrari to have four wheel independent suspensions, which also featured a hydro-pneumatic self levelling system. Power steering and air conditioning were standard, whilst excellent insulation from noise and vibration was achieved by stabilizing the engine, gearbox and rear axle casing in one unit and mounting it all at four points on special rubber bushes.
The engine itself was the new Type 245, with a displacement of 4.4 litres, single overhead camshafts and three Weber carburetors, producing 320 bhp at 6,600 RPM. The car was indeed no slouch - with a top speed of 152 MPH, it could achieve 0-60 m.p.h. and 0-120 m.p.h. times of 7.2 seconds and 26.2 seconds respectively.
This special 365 Ferrari baring the chassis number 19235, was originally a 365 GT4 2+2 and it was purchased in 1976 by Mrs. Nadia Proietti. Later, in 1979, Mr. Ercole Torrenti, an entrepreneur film maker in Rome, became the new owner of the car until 1989.
In the early 80s Mr. Torrenti decided to re-body his Ferrari 365, with the intent to make it unique and special. He entrusted the bodywork to be carried out by Daddario brothers in Turin, a small body shop (part of the register of manufacturers) who allegedly made sport prototypes and above all they supported the most famous coachbuilders in Turin such as Boano, Pinninfarina, Vignale and Moretti.
Daddario brothers were inspired by the most famous Ferrari sports racing cars of the 1950s. The car was then completely disassembled and re-bodied and became the car you see today - a Ferrari Barchetta with 12-cylinder engine and aluminium body, tubular frame with a shorter wheelbase and 2 seats. This transformation took 6000 hours of work!
The car is accompanied with a declaration by Daddario, written in 1989, when Mr. Torrenti sold the car. In this statement Daddario writes:
“The undersigned Oreste Daddario already co-owner of the homonymous body, declare that I have made on behalf of Mr Brooks Hercules of Rome in the early 80s a prototype sports car with an aluminium body, tubular frame with a shorter wheelbase, two-seater car – a Ferrari 365 chassis 19235. the car was completely dismantled and reconditioned maintaining all original mechanics. “
Recently this special 365 Barchetta participated at the Ferrari Meeting in Milan. This car comes with its Italian paperwork and the declaration by Mr. Oreste Daddario who re-bodied the car.
Presented in iconic Italian red with black interior, this is a wonderful and exciting sports car which would be admired on any road anywhere in the world. Exciting styling, wonderful performance, spine tingling engine note and nostalgic to drive – not to be missed.
For further information or to arrange a viewing, please contact our sales department.

Email ThisBlogThis!Share to TwitterShare to FacebookShare to Pinterest
Labels: kitcar