Today I’m going to try to write a proper blog update. Reason being is that I stumbled upon something which I found interesting. So a nice opportunity to improve my writing skills. The good thing about the blog is that I can freely express myself without bothering anyone else or force my opinion upon them. Unlike is the case on a forum or other media. So far I did not put much effort in writing up decent Blogs. Mostly they have been very brief updates and sharing information about items I catch on the internet or bought.
By now it has become quite an impressive collection of information. If I had known beforehand I would have put more effort in organizing it and make a better lay out. I don’t regret it though, it just shows how it naturally developed.
Before I started the blog I had already spend a fair bit of time on the Internet to learn more about the car. I was struck how little information could be found about this model – especially in comparison with the other Ferrari models. And if something could be read it was often the usual slack off about this car. The only decent website available was the European 400 club. And the Fchat forum was also a good and informative source.
But that was about it. The intention of the blog was at first only meant to keep a bit of track record about my 400. Another car I have is the Lancia Thema 8.32. And for the sake of keeping this blog clean and 400 specific I’m not going to dwell to much about it either. For this car I do a daily routine in finding internet information. I simply extended the searches for the 400 and this is how it all started to grow.
Lately it seems like the 400 is attracting a lot of attention and surprisingly also often positive sounds and remarks are being made. One of the sources I consult is Facebook. Just like Twitter I consider this a very volatile medium and often somewhat superficial. It’s open character makes it easy to connect and exchange information quickly. There is however no structure in maintaining all this data. This requires regular checking and acting swiftly on items of interest.
Earlier this week I spotted someone posting a picture of a 8.32 with a person posing next to it. It was a digital picture of an older photo. I thought I recognized that person on the photo. He looked
familiar to me. 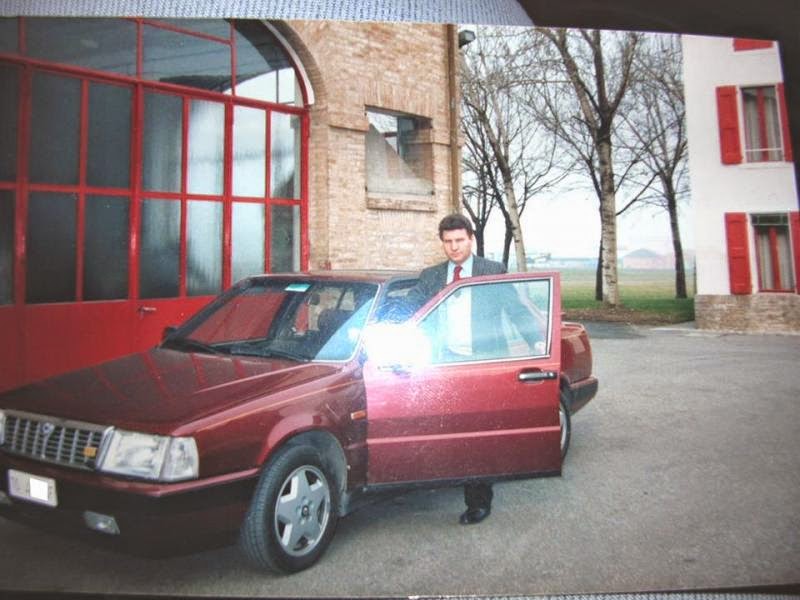 A while ago I finally had found a picture of Enzo Ferrari in combination with the 8.32. I had read a few times before that Enzo in his last years was driven around in a 8.32. But I never had seen any concrete evidence. Until someone approached me with a collection of papers and books regarding this car. One book did had this unique picture of Enzo and the 8.32. It was a picture taken when the F40 was going to be presented. On that picture the same person was visible. 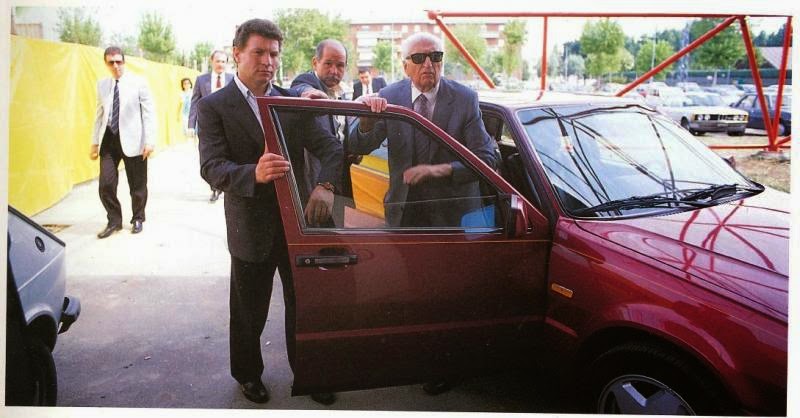 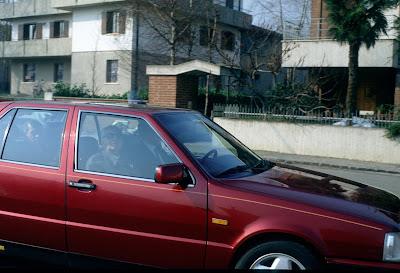 So I figured he had to be some kind of bodyguard or chauffeur. In order to find out I simply left a PM to the person on Facebook. He responded quickly and told me it was the personal chauffeur of Enzo.  Something I never paid any attention to before or looked into. When I asked about the name of the chauffeur and how he got this picture he responded with the name Dino Tagliazucchi and said it was his picture. I was hooked immediately. So first thing I did was doing a search on Google regarding the personal chauffeur. Not that much information was found but the first hit was providing a sample of an article in the Cavallino magazine. The article was the personal story by the chauffeur written by himself. So I simply needed to have that magazine and ordered a back copy. 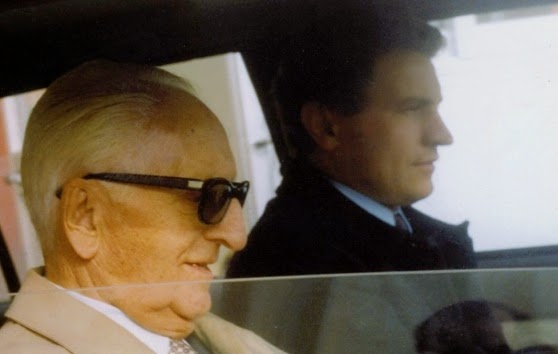 Some other online articles I found were many times also referring to the cars of Enzo. It turned out a very known used car is the Peugeot 404. 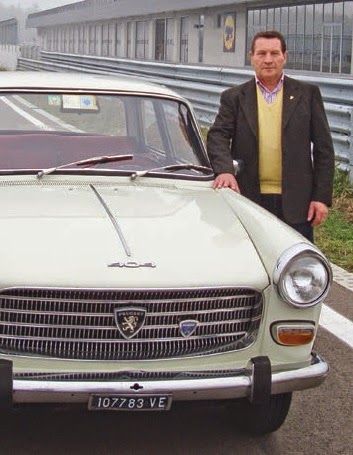 It was also particular interesting to read what other cars Enzo owned and drove.
By now I have received the magazine and it reveals much more about Enzo's cars and his preference. To touch base further on this aspect is the following, and I quote: “Among the full size models that he liked, I must mention the 130 coupe, and that he really was fond of that car because it was equipped with an automatic transmission. Later on, his personal Ferrari, which we rarely drove, became a 400 automatic". 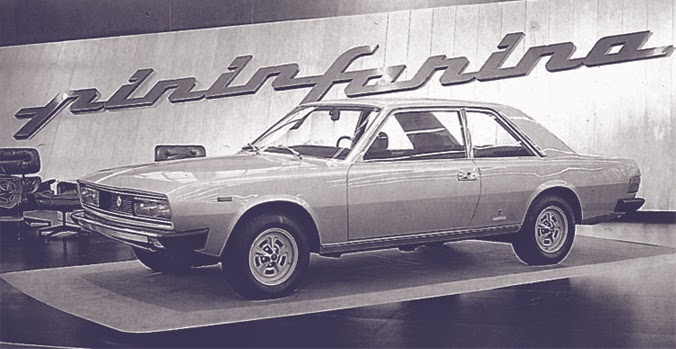 Fiat 130 Coupe presented at the Autosalon in Geneva in 1971 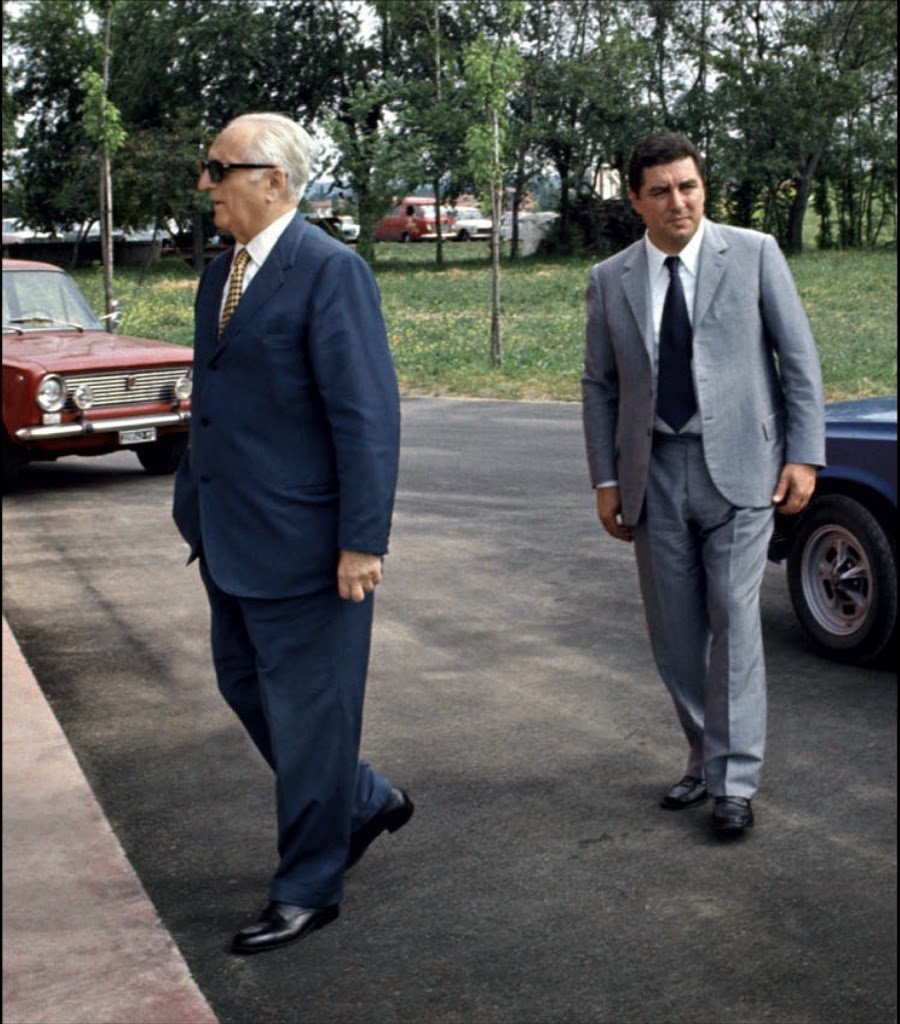 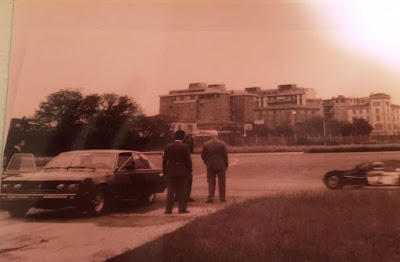 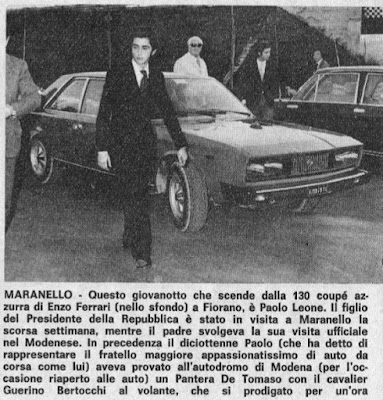 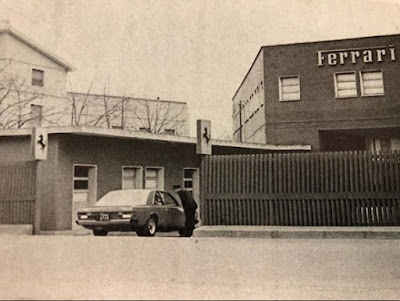 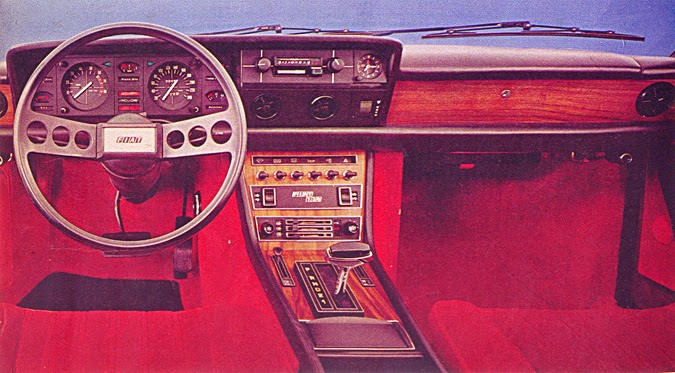 As a side note, and for the incrowd it is no news, the automatic gear lever used in the Fiat 130 coupe is identical as used in the Ferrari 400. Mind you, the Fiat 130 was using a Borg-Warner automatic and the Ferrari 400 a THM400 Automatic gearbox by GM.
Again this was for me another confirmation of what I heard or read somewhere. Clearly without Enzo’s approval the 400 Automatic would never have been realized. Just like was the case of using a Ferrari engine for a 4 door saloon; Lancia Thema 8.32.

At one point in time Ferrari did build a 4 door concept, known as the Pinin. It remained a one-off though. 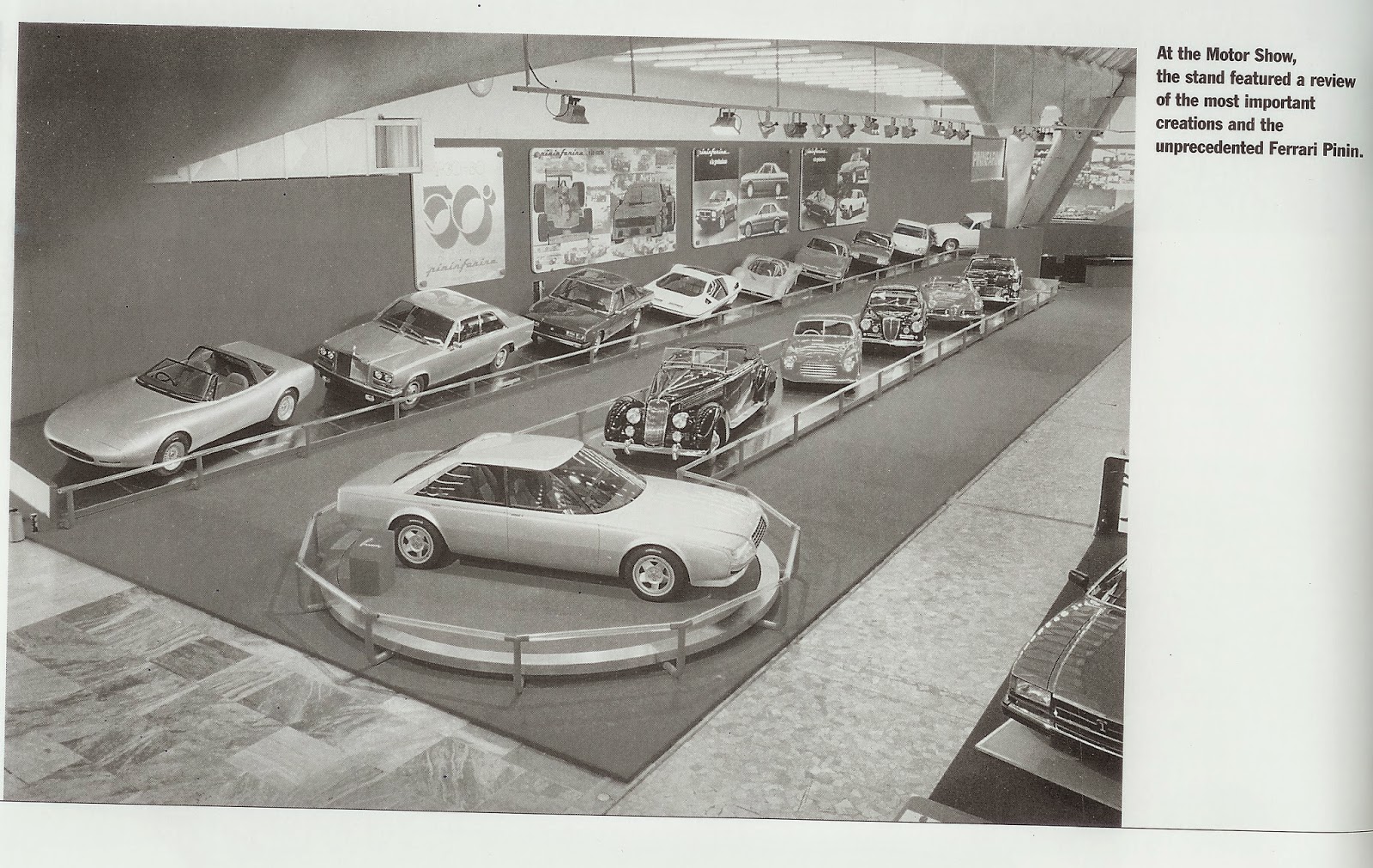 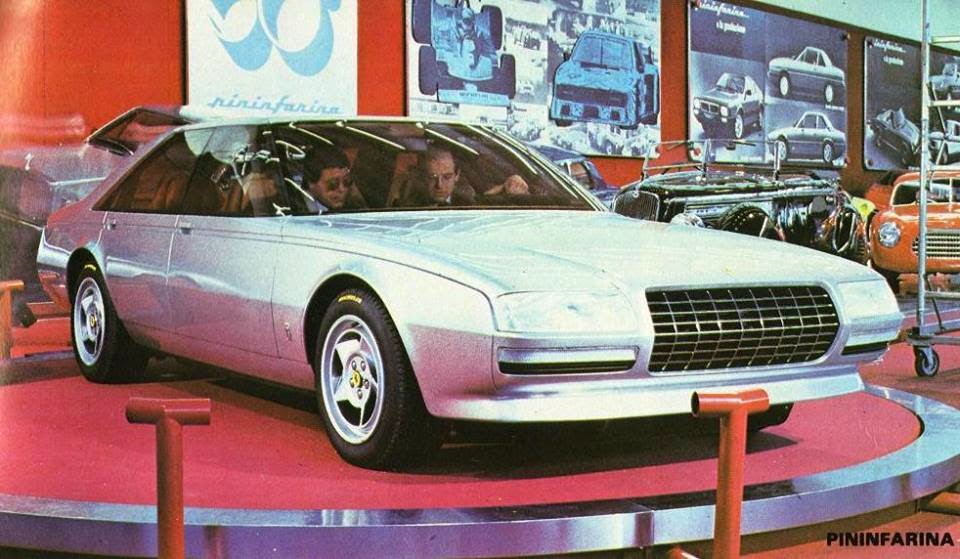 Other articles I read regarding the automatic transmission highlighted the fact this was already looked into earlier. In 1970 Ferrari had produced 6 automatic versions of the 365 GT 2+2 (Queen Mary). So there goes the myth the 400 was the first automatic. All of these were for the US market and sold by dealer Luigi Chinetti. It is unknown how many have survived.
The other story goes this idea was a spin off by someone in the USA who build the GM 400 Turbo Hydramatic on his own Ferrari 365 GT 2+2. This was however achieved in 1971 but perhaps the mentioned year might be wrong. This was done by Chic Vandagriff, the known Ferrari dealer off Hollywood Sport Cars Inc. 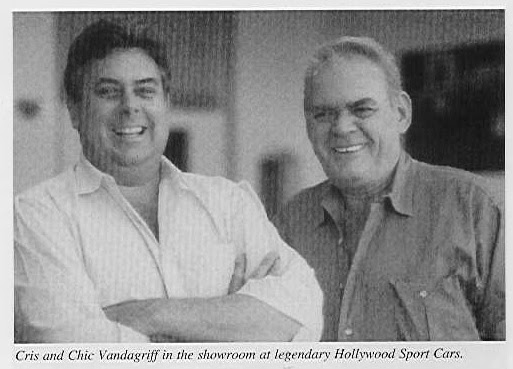 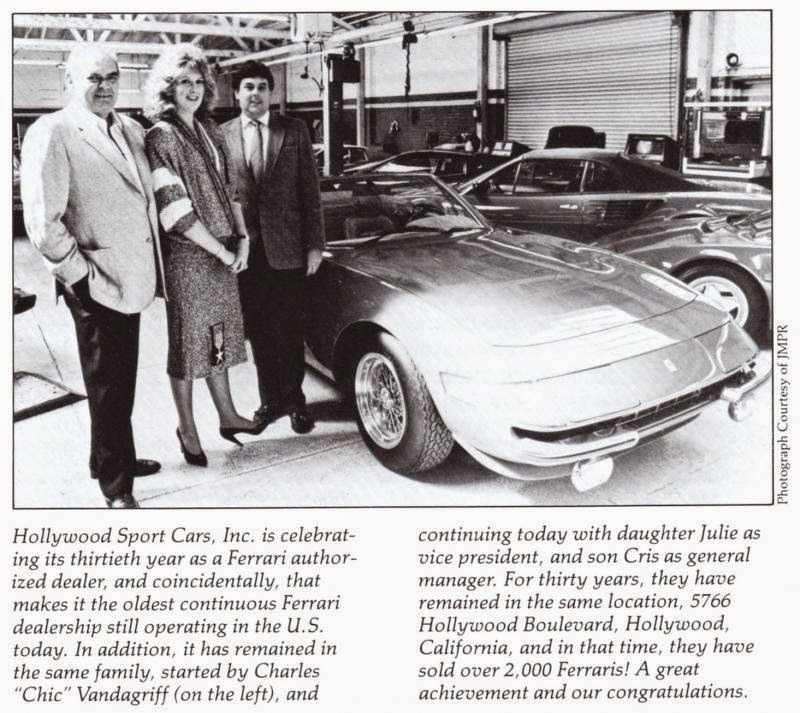 Apparently this conversion attracted the attention of Ferrari. Rumor has he shipped it to Ferrari in Maranello for further investigation and development. And the rest is history by now. It took only till the next uplift of the 365 GT4 2+2 before it could be launched for production, which we all know as the infamous Ferrari 400 Automatic.


Recently I also obtained a French advert regarding the Ferrari 400 automatic which was guided by supporting information of Charles Pozzi. 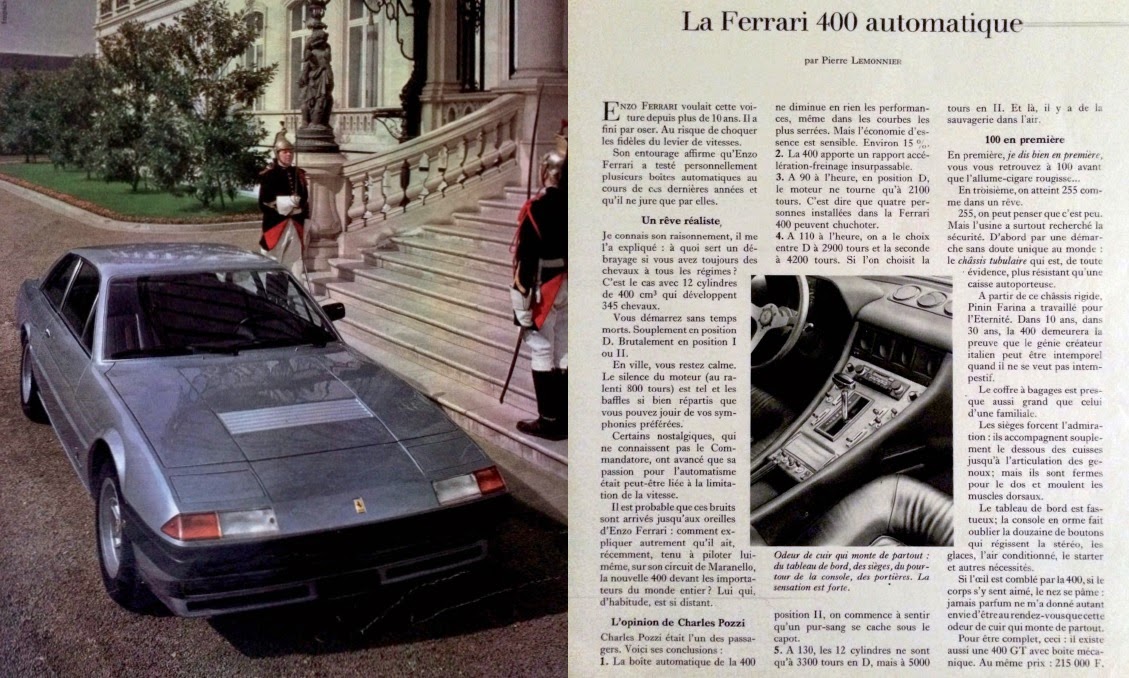 Also this article points out very nicely and in favor of the automatic. For those who do not speak French, this ''publi-reportage'' reports on Charles Pozzi's personal experience of the 400 Auto in Maranello. It says that Enzo had wanted an auto gearbox for at least ten years and had tested it extensively before installing it in the 400. Allegedly, he drove the 400 auto the day when worldwide importers of Ferrari - including Pozzi - were invited to Maranello to test it : ''he (Enzo), who is usually so aloof'' (the article actually says that Pozzi was a passenger of Enzo).

The article puts forward the ability of the car to offer a gentle and silent ride in town (800 rpm) as well as ''brutal'' accelerations, it says that the auto gearbox does not hamper the engine whilst offering a lower fuel consumption (crisis, crisis) than manual. I find it interesting that the author also offers a description of the ability to ''choose'' between the three gears just like with a manual, depending on the desired rpm regime, at different speed. A very ''modern'' argument, just like for the F1 gearbox two decades later. Although the drafting can be a bit amusing for todays reader ''in first gear, I mean it, in first gear, you can get to 100 km/h before the cigarette lighter gets red''.
The article also praises the tubular chassis, the design by Pinin Farina (in two words) and the comfort of the car, as well as the smell of leather (I can testify that even after 30 years, it smells!). The final reference to the manual gearbox is almost dismissive. Only one conclusion: the 400 automatic was ahead of its time.

Personally I don't consider the 400 a sports car, it's to big and to heavy as well for that matter. To me it's simply a Gran Turismo. As such the automatic version suits the car so well and makes it a true GT. Interestingly Ferrari labelled the manual version as 400 GT while the standard version is simply called 400 Automatic. It's for good reasons the majority of the new buyers preferred the automatic above the manual version. Today no one is making a fuzz anymore about automatic. It's all about 'schalten wie Schumi'.

Given the history above I'm off the opinion the 400 Automatic deserves more recognition and should be appraised accordingly.
Sources: